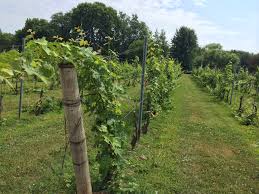 The wine and grape industry is a massive driver to the province’s economy. In 2015, it contributed $4.4 billion to the Ontario economy by supporting 18,000 jobs and hundreds of small family-owned businesses, while also attracting over 2.4 million tourists to wine country every year. Ontario Craft Wineries alone represent over 100 wineries across the province with a vast majority being small to medium sized family-owned businesses. Their craft wines are a significant driver of the Ontario rural economy due to VQA wines being 100% Ontario grown and produced, which contrasts to other alcohol beverage sectors in the province.

The grape and wine industry is also a significant driver for the local economy in regions such as Niagara, Prince Edward County, Lake Erie North Shore, and other areas in Windsor-Essex County such as Pelee Island. Essex County contains 17 wineries that produce award-winning wines owing to the area’s unique maritime climate with longer sun hours than any other area in Canada. This makes the wine and grape industry a popular local tourist attraction which generates revenue for the local economy. “The real key here is that small wineries actually create a lot of jobs,” says Tom O’Brien who is with Coopers Hawk Vineyards in Harrow.

Unfortunately, due to overly strict and unfair regulations imposed on the sale and distribution of wine in Ontario, small businesses and rural communities have been experiencing a loss in profit.

Ontario wines are being met with an import tax of 35% plus an additional retail store tax of 6.1% despite being domestically produced and sold. This has resulted in consumers choosing to purchase wine brands that are truly imported having more competitive pricing.

O’Brien said that due to the absurdly high taxes imposed on domestic wines, selling a $15 bottle of wine from his storefront would only allow him to keep about $11, and even less if he is selling through the LCBO network at $6.50 (CBC). The Chamber has requested that wineries be able to sell to stores outside of the LCBO network eliminating the 35% import tax on domestic wines.

Other wine producing nations have a highly competitive advantage for the production and distribution of their wine when compared to Ontario’s wineries. While Ontario wines hold only a 24 percent market share with the LCBO, other nations are dominating their own market. The USA owns over 60% of their domestic market while some nations such as Spain, South Africa, and Argentina each own over 90% of their respective markets – well above what Ontario owns.

Steve Mitchel, President of the family-run Sprucewood Shores Estate Winery in Amherstburg, says that other countries aren’t placing similar markups on their own wine which gives them a competitive advantage, something that the Ontario wine industry is lacking (Windsor Star). He continues to say that if the LCBO were to drop their 35% import tax, the average cost of a bottle of wine would also drop from $15 to $11 allowing for greater competition.

To ensure that the Ontario wine and grape industry remains competitive in Ontario, the WERCC has urged the Government of Ontario to eliminate the 35% import tax levied on domestically produced and sold wines, eliminate the additional 6.1% retail tax that exists on top of other collectable sales tax, allow for direct delivery to new retail opportunities, prevent a grocery led oligopoly from arising, and enable the shipping of Ontario produced wines across provinces.

Implementing these regulations will allow Ontario grape growers and wineries the ability to continue growing their businesses, make significant contributions to provincial and regional economies, and create local jobs.

On Saturday, May 4th, the Ontario Chamber of Commerce held its 107th Annual General Meeting and Convention in Muskoka Lakes where various policy resolutions from across the province were considered. The Windsor Essex Regional Chamber of Commerce’s policy resolution on Ontario’s wine industry received an overwhelmingly positive amount of support being unanimously approved by the OCC delegates.

The adoption of this resolution will allow for the wine and grape industry to grow by reducing the tax burden, thus allowing for the creation of more jobs leading to economic diversification in the region.